top of page
This site was designed with the
.com
website builder. Create your website today.Start Now

Welcome to our first public viewing of FireRing Productions LLC.

Our goal is to bring good wholesome entertainment to your living room as we begin our venture with Ian's Realm Saga, a story about a young man, his father, and the adventures they face when they stumble into an alternate world filled with beauty, deception, and peril.

Ian Wilson and his dad were the first people from our world who ever discovered The Realm. A young reclusive teenager, Ian loved his widowed father, his video games and his quiet room. Never once did he feel a need to step beyond the normal. One day his father was working on a game engine he had created, a project he and Ian were designing together. Something strange happened. The characters they made for the game were running away into a land far beyond their computer screen. By chance, a remote was clicked, the house shook and suddenly a portal was opened.Alex Wilson, a man of adventure, a true scout and knowledgeable woodsman found this an opportunity of a lifetime. Ian didn't want to be left behind so he followed. Beautiful and pristine it was easy to appreciate the countryside. When they found the horses willing to take them on a ride, why wouldn't they want to explore? Even the little computer character that Ian made, who had magically come to life, couldn't convince them that the dragon was a real threat.

The sound of the oars gently guiding the vessel through the shallows eased Ian’s misgivings. It was peaceful. They floated the canoe to a sandy beach by the meadow and disembarked. Shoes tied together and slung over his shoulder, Ian dug his bare toes into the warm sand as he followed his father up the hill. They passed sand dunes speckled with grass, then wandered into the loamy soil of the meadow, and on to a clearing where a large old stump protruded from the ground. The dead tree caught Ian’s interest. Two gnarly and crooked limbs shot out of its sides bringing a laugh from Ian. The old stump resembled a crooked old man. On its face two mossy green knotholes gave the appearance of eyes, and silky lichen hung from inside the cracks in thick, wiry strands, resembling a beard.

Neither Ian nor his father could have imagined what was in store for them. How would they know about Deception Peak, sorcery, the legends of the wizards, the dragon worshiping tribes, or old Stenhjaert? Their adventure into the Realm would change their lives forever! ​ 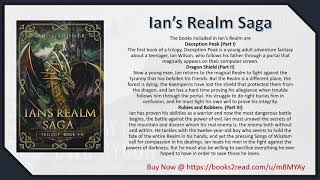 OWS CyCon is now in session